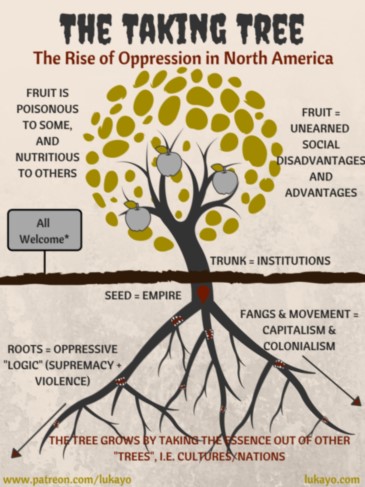 The Taking Tree is a visual tool for sighted folks that can be drawn piece-by-piece or used as a poster/handout to give a rough overview of the rise of oppression in North America. The purpose of this tool is to show the many intersectional moving parts of how oppression grows and works over time. For a more in-depth version of the Taking Tree, check out the 2015 Prezi version, which is linked further below. For this simpler version, you can use it to explain the following concepts:

I learned The Taking Tree while preparing to co-facilitate my first anti-oppression workshop with Reem Girgrah and Casper in the summer of 2010 on unceded Algonquin territory, Ottawa, Canada. Reem taught me a more bare-bones version of the tool that just described the roots, the trunk, and the branches/fruit. She said it came from an Internet source, but we haven’t been able to find out what it was, after all these years. A similar tree, called The Tree of Colonial Oppression, was published in Honouring Indigenous Women: Hearts of Nations (Vol. 1) booklet in 2011 by Indigenous Peoples Solidarity Movement Ottawa (IPSMO). There is also a similar Oppression Tree used in workshops for McGill University Residences first year students, but the earliest version I can find is dated 2014. It’s possible that all these trees have a common origin in the Ottawa-Montreal area, or originated from the contributors to the IPSMO booklet a year before it was published. If folks come up with a specific origin, I will attribute and credit appropriately. The seed, fangs, and sign of the Taking Tree, as far as I can tell, I came up with originally.

While presenting the Taking Tree, you can interact with participants in the following ways:

The poster has a dark grey tree with sickly green leaves and pale grey fruit. Under a rough brown line that represents the ground, it shows a red seed at the centre of the tree, and dark grey roots continue downwards. The roots have tiny red mouths with white fangs in them. There are two grey and red arrows that show that the roots are moving outwards underground. There is a grey sign which reads “All Welcome*”. The title of the poster reads “THE TAKING TREE: The Rise of Oppression in North America”. Text near the fruit read “FRUIT IS POISONOUS TO SOME, AND NUTRITIOUS TO OTHERS” and “FRUIT = UNEARNED SOCIAL DISADVANTAGES AND ADVANTAGES”. Near the trunk the text reads “TRUNK = INSTITUTIONS”. Near the seed text reads “SEED = EMPIRE”. To the right of the root network text reads “FANGS & MOVEMENT = CAPITALISM AND COLONIALISM”. To the left of the root network text reads “ROOTS = OPPRESSIVE “LOGIC” (SUPREMACY + VIOLENCE)”. At the bottom of the root network red text reads “THE TREE GROWS BY TAKING THE ESSENCE OUT OF OTHER “TREES”, I.E. CULTURES/NATIONS”. At the bottom of the poster, it reads “patreon.com/lukayo” and “lukayo.com“.

Want to have access to the larger full colour updated 2018 poster, the original photograph of the hand-drawn 2016 poster, and other anti-oppression related teaching tools? Click on the link below and subscribe for as little as $3/month. By becoming a patron, you support healing work among my communities, and the indigenous Elders that mentor me.

A wordslinger and healer from the Bikol diaspora, Lukayo is based on the unceded and unsurrendered territories of the Anishinaabe (Algonquin), in so-called Ottawa, Canada.  When not daydreaming of starting a sanctuary with land defenders and nonbinary priest(esse)s, Lukayo is probably hanging out at their intentional community home made up of other spiritual activist queerdos.
View all posts by Lukayo →